Because I promised to share this story one day…

NOTE: This article was originally written in 2010 for inclusion in the historical records of my then National Guard unit.  I was a newly minted (and anciently cynical, having spent a number of years in the NCO corps) Medical Officer whose first assignment from the BC upon reaching my unit was to come back the next month with an essay about my experiences in that battalion to be included in the new museum’s archives. My response was this attempt to come up with something that the unit historian would never, ever actually allow to be published, while just plausibly polite enough that I couldn’t be called out for insubordination. Every word is true.

So how exactly did a nice southern girl like me end up in a brothel in Asia? Well, it all started because SSG [that’s Staff Sergeant to the uninitiated – ed.] N wanted to go to the zoo.

We were in Dushanbe, Tajikistan, to carry out a state partnership mission, carrying out an “Information Exchange” with the medical personnel of the different military ministries of that country. It was 2007 and I was the junior buck sergeant on the mission, discussing the US Army’s Combat Lifesaver program and how it could be adapted for use by the local military. The Tajik National Guard (their border guards) in particular, face frequent gunfire while interdicting drug shipments from Afghanistan. Due to its location 90 miles north of the Afghan border, and its history as a former Soviet state, Dushanbe has become a major air hub through which heroin, a major source of funding for the Taliban, passes on the way to Europe, via Moscow. As a result, the soldiers there are intimately familiar with the difficulties of providing low-tech trauma care in an austere environment.

They were a gracious and attentive audience, sharing their own experiences, asking good questions about methods and reasoning, arguing vehemently where our protocols, particularly regarding pain control, differed from theirs. They are only now beginning to institute a western-style NCO corps, having previously favored the old Soviet-style, top-down approach to military leadership, so the concept of training large numbers of junior non-medical personnel in basic trauma and evacuation is a new approach and it was very fulfilling to think that our presence was potentially going to save lives. They were gracious hosts as well, seeking to show us around their country and culture and during our weeks there we had several opportunities to travel with our translator.

On our first trip through the city, SSG N happened to notice a sign for the Dushanbe Zoo and became immediately enamored of the idea of a visit. The rest of us were not particularly interested and when our translator simply stated that we didn’t want to see the zoo, that it wasn’t a very good one, we were willing to accept that answer and move on. SSG N, on the other hand, was most insistent, he’d been to the zoo in every city he’d ever visited and didn’t see why Dushanbe should be different. We had some time built into our schedule for sightseeing, and why not a zoo? Our translator broke it down for him, by explaining that during the civil war that took place shortly after Tajikistan declared itself independent of Russia (1992-1996) no-one had the time or resources to care for the animals so many of the animals had died, and others had been killed for food. This seemed to settle the matter, but the word “zoo” would nevertheless creep into several of SSG N’s conversations in the days to come.

At lunch one day, chatting with our translator about the local sights, he mentioned in passing a restaurant known to western visitors as “Birds of Prey” for the owner’s method of touting for trade by displaying a collection of the aforesaid avians out front to passersby. At that SSG N went into ecstasies at the thought of eating at the restaurant and seeing the birds. He spoke about it for days, finally advancing the argument that as we hadn’t let him see the zoo, we could at least let him see the restaurant’s raptors. In hopes that we could finally shut him up, we agreed and made plans to go there for lunch on our last free day in Dushanbe.

Lunch was served on a large covered porch, with a window through which food was passed as it was prepared. Half of the tables were surrounded by couches, allowing diners to recline, the other half with western-style seating and booths. The food was traditional Tajik, hot fresh flatbreads, plov, and crisp kebabs, with the fat still on, all served by an assortment of young Tajik women, all dressed in relatively conservative western style; jeans, sweaters, denim jackets. Nothing unusual, except perhaps for the fact that someone had gone crazy with a BeDazzler somewhere along the line, and everything was rhinestoned to within an inch of its life. They laughed and chatted happily with us through our translator while the owner brought out a succession of hawks and owls, much to our entertainment.

Surprisingly, when we asked to see where the food was prepared, they graciously took us through the baking room, where more traditionally-dressed women were busy at work turning out flatbreads from wood-fired ovens, and out the back door. The back of the restaurant building had several built in alcoves, that apparently doubled as both homes for the various birds and as middens, as they were sadly filled with garbage. A large drainage ditch ran behind the building and beyond that was the open-sided outdoor kitchen, accessible only by a bridge, where our meals had been prepared. It was as clean as it could be given the circumstances, and the cooks were justly proud of the excellent food that they were turning out, but to someone used to indoor cooking and health department oversights, it came as rather a shock.

More of a shock came during the meal itself however, when our translator happily announced that we could not only get lunch there, but also “get lunch” there, if we knew what he meant. Jaws dropped at the realization that we had been happily eating lunch at a brothel. What did we do with that information? Um, not much really. Went back for dinner.

What can I say? The food was excellent (i.e. no-one got sick), they had strong Russian beer and, in the evenings, it turned out to be the place to go if you wanted to see authentic Tajik belly-dancing and a heck of a live band. And hey, it gives this suburban mom a hell of a great story to tell whenever her kids think she’s a boring old fogy who never did anything interesting. 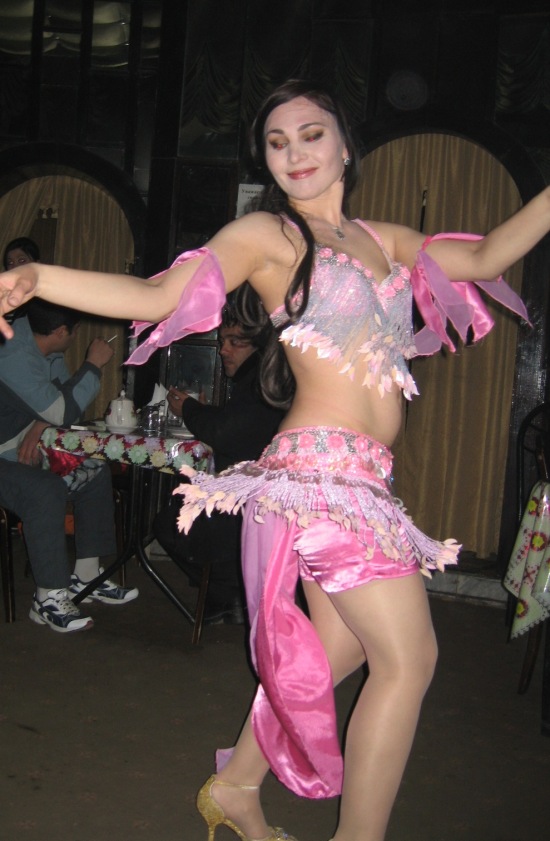 Disclaimer: I am not compensated to provide opinion on products, services, websites and various other topics. The views and opinions expressed herein are purely my own. Any product claim, statistic, quote or other representation about a product or service should be verified with the manufacturer or provider. All content herein is my own save for stock photos or quotations shared under Fair Use guidelines. Please don’t steal it without asking nicely first and linking back here to help make me really, really famous.

Questions? Comments? Want to tell me why I'm wrong? Have at it below. Cancel reply

In no particular order, I’m a mom, a retired military officer, a medical practitioner, a travel junkie, an educator, a dyed-in-the-wool B-movie nut, a wife, a daughter, a metalhead, a big old nerd, and a mildly obnoxious (small ‘l’) libertarian.
On The Subject of Horror

Mad Genius Club
It's A Stampede!

The Worlds of Amanda S. Green

Where you'll discover how the mind of one warped writer works.

The Eclectic Mind of an Author: join the conversation…

A former sailor's ramblings on anything from family, country and Church through general geek-ness.

A blog about culture, politics, history, and sports.

A Damsel in This Dress

My life in stitches - adventures in the world of costuming...

Comfort food for an Uncomfortable time

A book by Elizabeth Thalhimer Smartt.

"Find what you love and let it kill you." – Charles Bukowski